A century ago Americans didn’t need programs to connect the generations: homes and communities housed people of all ages. But as people started living longer and moving into cities, we started thinking differently about people at both ends of the age spectrum. Schooling became mandatory, child labor was outlawed, and Social Security and Medicare made a secure retirement possible for millions. The benefits were significant, but so was the downside: the natural order of things was subverted, and the generations lost contact. Our society is now acutely age-segregated.

What’s the harm?  According to I Need You, You Need Me: The Young, The Old, and What We Can Achieve Together, a terrific new report from Generations United & the Eisner Foundation, age segregation:

I’m glad to see ageism top the list, and I’m excited the way initiatives to connect the generations are cropping up. Generations United has been at this a lot longer than I have, although I learned about their work early on in this project, when Executive Director Donna Butts spoke at a seminar for journalists in 2008. “Thomas Jefferson said the web of relationships between generations is essential to civil society,” she said. “Why do we keep trying to unweave that web? Because it’s easy to default to intergenerational conflict mode than to deal with the real problems.”

What role does age segregation play? If the generations have little opportunity to get to know each other, it’s easier for “us vs. them” ways of thinking to get a foothold.  Zero-sum reasoning doesn’t just distract us from the underlying issues and pit us against each other. It’s unethical. We know it’s not OK to allocate resources by race or by sex, so why should it be acceptable to weigh the needs of the young against the old? Look, for example, at the way generational revenge is being invoked to marshal the youth vote in the upcoming UK General Election. Or how the latest Republican budget is being framed as benefiting olders at the expense of the poor—as if no poor people were old and Social Security didn’t buttress millions of families. In nearly half of those families, grandparents are helping raise grandchildren.  That’s according to a 2016 survey by Encore.org, which found that Americans have little appetite for a “generation war” and view intergenerational interdependence as a source of unity and mutual benefit—especially in these difficult and divisive times.

The synergies are obvious, especially as the number of Americans over 65 swells. Many are keenly interested in supporting and guiding those who come next. “Why not match talent with need, tap experience for youth, connect supply with demand? Why not activate this solution hidden in plain sight?” asks Marc Freedman, the founder of Encore, which launched the Generation to Generation campaign last November to mobilize a million people over age 50 “to help young people thrive and unite all ages to create a better future.”

Another indicator of more cross-generational thinking?  The emergence of “all-age-friendly” (as opposed to “age-friendly”) community-planning initiatives is. As this smart post about the “All-Age-Friendly City” observes, “building trust between generations” is key to creating safe, green, accessible, communitarian living spaces. Here’s an actual sign, the name of a joint healthy aging initiative in South Orange and Maplewood, NJ, where I spoke last Thursday. 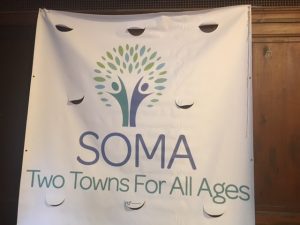 And here’s a list of intergenerational programs in healthcare, infrastructure, and education.

Remember the old brain teaser about the man and his son who are in a bad car accident? The father dies and the son is rushed to the hospital. The doctor on duty blanches and says, “I can’t operate on this boy—he’s my son!” Who is the doctor? Answer: the boy’s mother. Women doctors aren’t rare any more, but this stumped me when I was a kid. Fast forward to last summer, when two friends of my daughter Morgan struck up a conversation with my friend Cory in a B&B upstate—all hip NYC lesbians in their early 30’s, as it happens. Morgan’s friends figured out the connection, but not without a jolt of surprise when they realized that it was through me, Morgan’s mom. That’s because it’s so unusual to be friends with people more than 10 years older or younger than ourselves. Won’t it be great when such friendships are as ordinary as women doctors?  That’s the world all these great programs are working to bring about.

2 thoughts on “Let’s get intergenerational”