Note: if you’re new to my work, do check out the links, which explain or expand upon some key ideas.

Author and activist Barbara Ehrenreich has long been one of my heroes, and I imagine an affinity in our fondness for myth-busting. In her new book, Natural Causes: An Epidemic of Wellness, the Certainty of Dying, and Killing Ourselves to Live Longer, she describes herself as an “amateur sociologist,” and I thought, “Aha, me too!” But although I was a staff writer for a science museum for twenty years, Ehrenreich’s Ph.D. in cellular immunology leaves me in the dust. She brings deep medical expertise to her latest subject: the American delusion that we can evade aging, even death itself, via right doctoring, right acting, and right thinking. (Her previous book, Bright-Sided, skewered Americans’ outsized faith in positive thinking; here’s my take on it.) 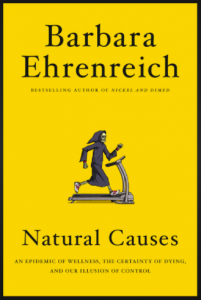 I couldn’t agree more with the book’s exposition of the damage done by our reluctance to acknowledge aging and mortality. Age denial is where ageism takes root, and it’s fed at every turn by a culture that frames aging as failure and natural transitions as disease. Shame and fear create markets, capitalism always needs new markets, and healthcare is big business. Age denial not only fosters ageism, it makes a good death less likely. Pretending we’re not getting older, not to mention mortal, makes it harder to embark on the necessary conversations about what we think we’ll want when the time comes. It also leads us to squander resources on costly but ineffective tests and treatments, especially towards the end. Most of Natural Causes is a detailed takedown of those tests and treatments, from mammograms to mindfulness: “preventive medicine” that Ehrenreich the biologist exposes as medically useless and ethically problematic. Fitness nuts live no longer than the rest of us. Placebos work, even when people know they’re being given a placebo. There’s no evidence that meditation is more effective than an hour spent doing anything calming. Most medical screenings—for breast, colon, and prostate cancer, for example, along with annual physicals—also fail the evidence-based test.

At 76, Ehrenreich is calling it quits on all that. She declines longevity for its own sake, and demands that we forsake the illusion that we’re in charge of our biological destinies.  “If anything, I hope this book will encourage you to rethink the project of personal control over your body and mind. We would all like to live longer and healthier lives; the question is how much of our lives should be devoted to this project, when we all, or at least most of us, have other, often more consequential things to do,” she writes.  One of the reasons Ehrenreich can afford this argument is that she’s a longtime gym rat, and I’d argue that staying reasonably fit is consequential. We know physical activity forestalls both physical and cognitive decline, improving quality of life. But the way we grow old is governed by a whole range of variables—including environment, personality, and genes, compounded by class, gender, race, luck, and the churnings of the global economy—over which we have varying degrees of control. Available only to the well-off, the illusion of control dumps all responsibility onto the individual, conflates luck with virtue, demands optimism without end, and shames when we inevitably fall short.

I do, however, take serious issue with the ageist way in which Ehrenreich frames her central argument. Rather than falling into the anti-aging or “successful aging “ camps, she explains, “I had a different reaction to aging: I gradually came to realize that I was old enough to die [emphasis hers].” Ehrenreich isn’t saying that humans come with an expiration date, pointing out mordantly that the military judges people to be old enough to face mortal danger at age eighteen. The title of her book comes from a phrase used in obituaries when the deceased is over 70: a death from “natural causes.” This raises no eyebrows, as she points out, and it shouldn’t. The death of a young person is indeed harder to bear than that of an octogenarian, because youngers have experienced less of what life has to offer and because the rest of us are robbed of the chance to witness and share those experiences.

That doesn’t make it OK to reduce aging to illness. “Even the most ebullient of the elderly eventually comes to realize aging is above all an accumulation of disabilities,” writes Ehrenreich. Above all?  Hardly! Growing old also brings self-knowledge, better mental health, even liberation, and is a period of ongoing growth and development, especially for those with meaningful roles and social supports. Even the most frightened and unenlightened know that despite the loss of cartilage and comrades, aging is different—and way better—than the way it’s portrayed in the culture.

Nor is it acceptable to suggest that olders are useless and disposable. Noting that the hallmark diseases of aging (atherosclerosis, arthritis, Alzheimer’s disease, diabetes, and osteoporosis) are all autoimmune disorders, Ehrenreich proposes that instead of asking why the body attacks itself, a better question might be:

“Why shouldn’t it happen? The survival of an older person is of no evolutionary consequence, since that person can no longer reproduce, unless one wants to argue for the role of grandparents in prolonging the lives of their descendants. It might even, in a Darwinian sense, be better to remove the elderly before they can use up any more resources that might otherwise go to the young. . . . And this perspective may be particularly attractive at a time, like now, when the dominant discourse on aging focuses on the deleterious economic effects of largely aging populations. If we didn’t have inflammatory diseases to get the job done, we might have to turn to euthanasia.”

Yikes! The premise that population aging will bankrupt society is economically and ethically flawed. Ehrenreich has been a lifelong activist on behalf of the less visible and privileged, yet here she buttresses ageism’s ugliest premise: as people move through life, they lose value as human beings.

The fact that the “dominant discourse” on aging is so negative and one-sided—so ageist, in other words—is what makes it so urgent and important to challenge age bias. The conversation is anything but neutral, especially around “living too long.” An ageist culture casts the “end of life problem” in terms of increasing numbers of old people who inconveniently refuse to die, when the underlying issue is the changing nature of healthcare: the plethora of profitable, often legally mandated, high-tech medical interventions the book decries. Whose interests are in play besides those of the patient, and who is her advocate if she needs one? It’s not a particularly radical leap to conceive of assisted suicide and euthanasia as a form of discrimination against the old, the ill, the disabled, and those who are no longer economically productive, cloaked in the rhetoric of compassion. In an ageist and capitalist society, the line between “right to die” and “duty to die” can get blurry alarmingly fast.

“Ideally, the determination of when one is old enough to die should be a personal decision, based on a judgment of the likely benefits, if any, of medical care and—just as important at a certain age—how we choose to spend the time that remains to us,” writes Ehrenreich. But the right to self-determination is important at any age. It’s ageism and ableism that make the old and ill seem less entitled to it, and cutthroat capitalism that sanctions their abandonment. Small wonder that it’s become commonplace to hear even healthy, middle-aged people wondering whether the ethical alternative to “living too long” will be to commit suicide—not because they’re sick, or broke, or have no one to take care of them, but simply because they’ve grown old. That is internalized ageism of the deadliest sort. At any age and in any condition, a person has the right to want to stay alive.

“Once I realized I was old enough to die, I decided that I was also old enough not to incur any more suffering, annoyance, or boredom in the pursuit of a longer life,” writes Ehrenreich. I’d tweak her credo:  replace “old enough to die” with “old enough to know better” or “old enough to choose wisely.” It’s not that she’s eager to call it quits, which very few of us do, but that she’s wise enough to spend her days doing what she likes. “As the time that remains to me shrinks, each month and day becomes too precious to spend in windowless waiting rooms and under the cold scrutiny of machines. Being old enough to die is an achievement, not a defeat, and the freedom it brings is worth celebrating.” Liberation from the specter of a long, costly, agonizing exit hooked up to machines is real, and this book liberates.

Ehrenreich is consciously opting for quality of life, which for her means a life as free of doctors and hospitals as possible. For the record, an ageist society grossly underestimates the quality of life of the very old. The bull looks different. Also for the record, much of the care doctors offer patients with terminal conditions is futile, and most doctors would themselves decline it. The medicalization of aging does make what Ehrenreich calls “the truly sinister possibility” more likely:  “for many of us, all the little measures we take to remain fit—all the deprivations and exertions—will only lead to a longer chance to live with crippling and humiliating disabilities.” But it’s stigma—ageism and ableism again—that make disability humiliating. And there’s a big difference between taking reasonably good care of yourself and giving yourself over to a life defined by doctoring.

Each of us will have to decide when to abstain or indulge, whether to be scanned or scoped, and how to cope with the consequences. I had every inch of me examined last summer, when I turned 65 and went on Medicare. That was before I’d read Natural Causes. When the next decision point arises, will I have the courage and clarity to forego tests or treatment? Will I break with my privileged demographic, buck my doctor’s advice, brave my family’s disapproval? Will I be not “old enough” but wise enough? I don’t know yet.

Not all of us will make the same choices, and none of us know what we will want at the end. But postponing those reckonings—not dealing with aging and its inevitable end—robs us of calm and content all the way along. I’m glad that growing hospice and palliative care movements are making it easier for more of us to forsake the futile pursuit of immortality, and hope the trend signals a growing cultural willingness to come to terms with the transitions ahead. What better way to maintain the upward trajectory of the U-curve of happiness—along with progress towards a world where ageism is as unacceptable as every other form of prejudice.