On Wednesday morning I got a submission to Yo, Is This Ageist? from Facebook friend, fitness instructor, and fellow activist Shannon West calling out the Oct/Nov issue of AARP Magazine. The cover says “31 Proven Age Erasing Secrets,” and a double-page spread about exercise is titled “Younger Next Year.” “Why not ‘Stronger and Healthier Next Year?” asked Shannon. “A publication allegedly devoted to living life well and fully after 50 telling you to ‘erase’ age and that ‘young’ is good and ‘old’ =deterioration unless you ‘erase’ it. Really?” I couldn’t have said it better, except to point out yet another problematic article on the cover: “Ways to Outsmart A Younger Co-worker.” It’s never a good idea to buy into, or support, old-vs.-young ways of thinking, which pit us against each other and distract from the underlying issue: discrimination that affects workers at both ends of the age spectrum.

As it happens, the next day I spoke at an AARP Oregon Breakfast Forum in Portland, the first All-Age-Friendly City in the US. Since AARP was buying breakfast and books, I figured I should mind my manners. What a welcome surprise, then, when Elaine Friesen-Strang of the AARP Oregon Executive Council introduced me—and pointed out the offending cover to the whole group! Below, a picture of Elaine with me and Jerry Cohen, also of AARP Oregon, getting ready to kick some consciousness-raising butt after brainstorming about the magazine and the organization as a whole—yay! 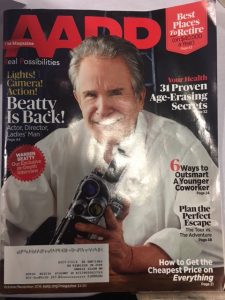 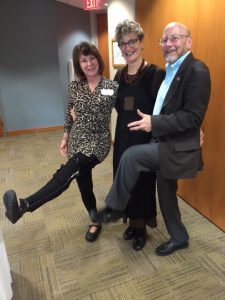 Elaine’s introduction gave me the opportunity to quote a comment on the AARP Facebook page from a woman named Susie Goode: “Again with the ‘we’re not old.” This is not disrupting aging, this is confirming that aging is the worst thing ever. It’s as if I claimed I were disrupting sexism by denying that I’m a woman. No.”  That’s genius.