Last week brought two very different gigs—one on the world stage and one in a Brooklyn community center.

The first was at the United Nations on October 6, to celebrate the 26th International Day of Older Persons. It was thrilling to be in one of the UN’s major meeting rooms, with simultaneous translations for people from all over the world, especially because of the theme—“Take A Stand Against Ageism.” The organizers invited me to give the keynote because they wanted a radical perspective, and I didn’t hold back. “Unless we confront ageism, older people will not have equal rights in any domain—whether retirement homes or refugee camps. Otherwise, the rest is noise.” 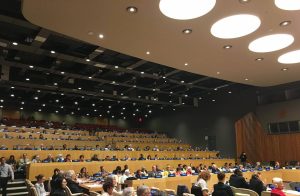 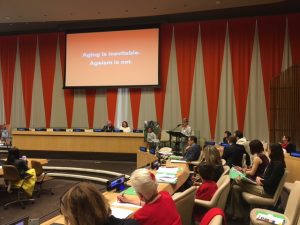 People were really listening, to the Ambassador from Argentina (Argentina sponsored the event) and to my colleagues on the panel that followed: Burhan Gafoor, the Ambassador of Singapore; Alana Officer of the World Health Organization in Geneva; and Necodemus Chipfupa the South Africa Regional Director for HelpAge International—what fantastic company! Edith Lederer, Chief AP Correspondent for the UN, was kind enough to give me the last word, in response to a question about the relationship between ageism, sexism and racism. The women’s movement, I pointed out, largely left women of color behind, the civil rights movement did little to promote equal rights for women, and no one was considering people with disabilities. I closed with, “This time around we have the chance to build a movement that is truly inclusive. Everyone ages. Let’s do it right.” (Here’s a link to the morning’s proceedings; my contribution begins at 28:18.)

The second gig was in a linoleum-floored meeting room on Staff Development day at the Fort Greene Council. The audience consisted of 80 workers from the 13 senior centers they sponsor across Brooklyn, not just managers but food service, maintenance and transportation staff. I was one of three white people in the room. The invitation came from Executive Director Claudette Macey, who had attended the NYC Department for the Aging’s launch of its End Ageism Now! Initiative on September 21. That event kicked off with a conversation between Commissioner Donna Corrado and me, and the Commissioner gave out copies of my book, This Chair Rocks: A Manifesto Against Ageism to staff citywide. 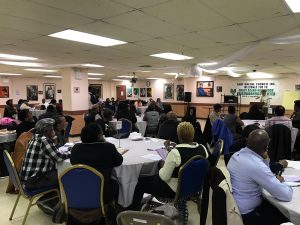 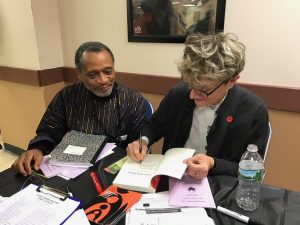 Macey read it and decided to make history by being the first agency to implement a concerted effort to confront ageism in all their senior centers. She bought copies of the book for her entire staff, asked me to sign them and talk about its message, and is assigning a chapter for discussion at a staff meeting each month. They’ll be measuring outcomes, holding a “graduation”—I’m invited—and establishing a model that other organizations can follow. That’s thrilling.

What does the week tell us? That that a movement to end ageism is emerging, that it can be truly inclusive, and that it’s going to take all kinds of different forms. At the end of October, I’ll be meeting with people at Portland Community College to discuss their End Ageism Campaign, and we hope to come up with a model that other schools could implement. That’s thrilling. Speaking of schools, my GP came to a talk at Book Culture in New York and asked, “Why don’t we teach kids about ageism when we teach them about sexism and racism?” Well, why don’t we? I bet some of you can help make that happen in your communities. Movements need a million voices and faces.