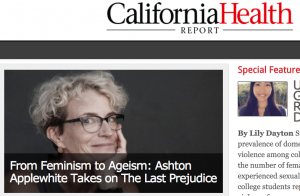 I’m lucky that the first person to review my book is Matt Perry, Aging Reporter for the California Health Report. He was one of the first journalists to interview me, very early on in this project, and his review, titled From Feminism to Ageism: Ashton Applewhite Takes on The Last Prejudice is quite the gift on the eve of publication day.