This post is by Sheila Roher, MPH, a veteran of the feminist and LGBT movements, who advocates a social movement approach to transform our social imagination around longevity. After studying with Dr. Robert Butler at Columbia University, she worked with “Age Friendly NYC” at the New York Academy of Medicine. She is the founder of Radical Age Lab, a social enterprise business, and is working on a book about aging in the 21st century.

It was 1973.  Escaping the rainstorm that short-circuited our leafleting efforts for a gay rights rally, we had taken refuge at the Pink Tea Cup, the soul food café in Greenwich Village. Over a killer sweet potato pie, George described the profound female feelings he had experienced all his life but was forced to conceal. I was sympathetic but clueless. Other than premenstrual cramps, the only gender-related feelings I could honestly claim were rage or frustration when I was dismissed, threatened, or trivialized because I had a vagina and breasts.

I warned George that if he transitioned, he might come to know my feelings (something I didn’t wish on anyone).   George thanked me, finished my piece of pie, and then went on to become Georgia.  Periodically we’d run into each other, and she’d remind me of that night and say, “Oh honey, you have no idea how badly women really are treated. If you really knew how bad it was, you’d be enraged!!!”  Georgia, it seemed, was not only more successful than me as a woman but also as a feminist.

I thought of Georgia when Caitlyn Jenner came out to Diane Sawyer. I’m always awed and moved by the courage required to live from one’s heart.  Even if our social notions of gender remind me of religions (i.e., initially sincere and profound experiences that get codified into political organizations), Caitlyn Jenner is leveraging her celebrity to stop violence against transgendered people and offer hope especially to young people. Good for her and us.

But the elephant in the room was Caitlyn’s age (65). 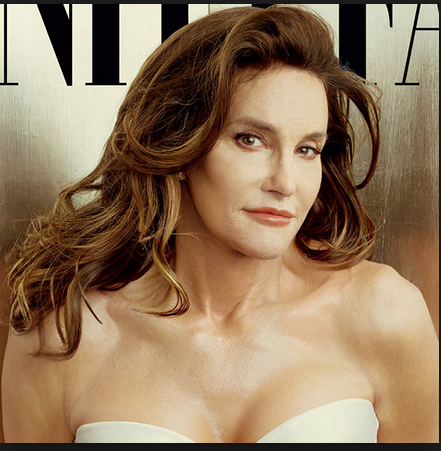 Will she be taken seriously as a woman if she is perceived as ‘old’?  As a culture, we sexualize and de-sexualize people based on age. The immensely profitable pharmaceutical campaigns for hormone replacement therapy were based on slogans of ‘don’t lose your womanhood”, making it clear that post-menopausal women were, well, no longer women. The idea that a real ‘woman’ must be capable of reproduction is an old and still current one. We heard it during the recent Supreme Court arguments over gay marriage when Justice Ginsburg challenged the idea that marriage requires procreation by reminding the Court that seventy-year-old heterosexual couples are permitted to marry.  Not so fast, countered the opposing lawyer; he argued that a seventy-year old man was “still capable of having children, and you’d like to keep that within the marriage.”  He argued, in effect, that the man was still a real man even if he was marrying someone no longer legitimately female by virtue of age.  The female gender, in our society, comes with a ‘use by’ date.

Of course, while ageism creates a particular burden on women, it’s an almost universally toxic label in our society.  Apply it to anything other than wine or cheese and it connotes only deterioration. “I’ve gotten old,” says a friend, meaning that she has less energy than she had before.  She’s also more experienced and wiser in her professional field, but the years of experience don’t relate to ‘age’ in her mind. A neighbor told me that her 12-year old Javanese was “getting old” because the dog no longer wanted to go on long walks.  (Turns out the dog had acid reflux, and made a full recovery on Pepcid.)  We use ‘aging’ as virtually synonymous with debilitated—the ‘aged and the infirm’ is part of our policy speak.

Language is the carrier for our values. When I was growing up, ‘queer’ was a synonym for ‘not acceptable’ and ‘acting like a woman’ was code for irrational or hysterical.  And when we say ‘I feel old’, we are telling the social story that to grow older is to grow inferior and inactive. That’s not the Caitlyn Jenner I’ve seen so far. I’m seeing someone not shying away from death or rebirth, someone taking risks to live more honestly and authentically, someone for whom the future is nothing but adventure.

So Caitlyn, here’s an open invitation to you—join us!  Help us challenge ageism and create a more open, inclusive, and loving society across all shades of age, gender, skin color, sexual expression, etc.  That’s the gold and silver we really need to win.

Read “So Gay and So Old.,” another post by Sheila Roher, here.