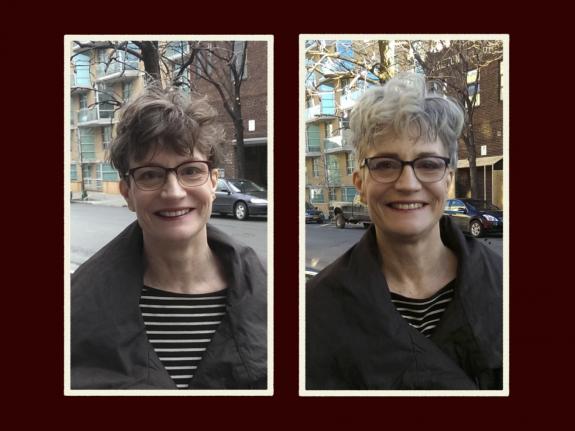 I’m the incredibly square and lazy woman who has never colored her hair. I inherited my mother’s no-gray-hair gene and except on my right temple, my hair is brown. In my line of work, though, that’s kind of a liability, because I don’t want people to think I’m trying to hide my age. I never believed Ronald Reagan when he said he didn’t dye his hair, did you?

I’d considered buying a white wig, pulling it off during a talk, and asking people what difference it made, but I have no talent for the theatrical. I decided to go the full monty while coming out of an art movie in the afternoon on Manhattan’s Upper West Side. (In other words, the entire crowd was people in their 60s and 70s.) I looked down from the escalator and spotted a single gray-haired woman and realized, “This is one way we collude, en masse, in making ourselves invisible as older women. That’s a real problem, because when people are invisible, so are the issues that affect them.” And I figured if I was going to talk the talk, I should walk the walk.

The big, if shallow, surprise is how much I like it, because I didn’t expect to. Also how quickly my friends seem to have gotten used to it, although I still do a bit of a double-take in the mirror. Perhaps because I chose it, the new color hasn’t changed my personality or way of being in the world.

I didn’t tell anyone I was doing it, and the first time my poor kids saw it was in the emergency room two weeks ago where I landed with a bad kidney infection. Which is why I haven’t gotten about as much recently, and perhaps why I haven’t noticed people treating me differently, although I’m tracking it. My manager at work said, “You don’t look older.” My friend Mer said, “You look older.” Her husband Josh said, “You look hot!” My acupuncturist said, “You’re hilarious.” My chiropractor liked it “because I equate gray hair with wisdom and being comfortable with yourself.” My friend Candace was frank about her confusion: “It’s just a weird look. The first impression is if it’s gray, you think old. You just don’t look old but your hair is gray.”

That confusion is what I’m shooting for. Candace’s grandmother, she said, was “a silver fox, bright and beautiful. I see my hair going gray and dye it all the time.” Why doesn’t Candace want that look? “I do – but it’s distorted somehow.” She thanked me for making her think about it, and maybe she’ll be a candidate for a campaign I’d like to kick off one of these days: the Year of Letting Our Hair Go Gray. For women who love coloring their hair, it wouldn’t mean never getting to play again: they could give the white a pink rinse a la Helen Mirren, or rock it with purple or blonde highights. Those who do it purely to cover the gray would be free of an expensive and time-consuming tyranny. Men too.

“You go first,” was one of the comments when I floated the idea on my This Chair Rocks Facebook page. I get that, so I did. “Fine for some but my hair doesn’t look good gray,” was another comment. Okay, but I wonder how much of her opinion is colored by what the gray signifies. That’s what we need to work on, in ourselves and in the culture: decoupling  “older” from “undesirable” and “old” from “ugly.” We’re getting an assist from younger pop culture figures who’ve gone gray recently, from Rihanna to Kylie Jenner to “Girls” star Zosia Mamet.

We all know that the most important factor behind attractiveness isn’t a push-up bra or dropping five pounds, but confidence. Gray hair + confidence is an empowering and liberating combo. I hope to see more people rocking the look, and I wonder whether mine will change for good. Right now I’m thinkin’ let the sides grow out brown and keep the longer top part white. Confusing!

2 thoughts on “So I dyed my hair white.”