Lindsey McDivitt promotes intergenerational understanding and is currently writing fiction and non-fiction for children that challenge age stereotypes. She is co-editor of Climbing the Mountain: Stories of Hope, Healing and Humor after Stroke and Brain Injury. Lindsey blogs and reviews “Positive Aging” picture books at A is for Aging, B is for Books.

Sadly, my mother’s doom and gloom warnings about growing older began somewhere in my teens. “Look, look at how the skin on my hand no longer bounces back,” she said, demonstrating with a tiny pinch. On my own hand I often wear a lovely silver ring from Denmark that she gave me after wearing it for many years. Mom passed it on to me with a comment that could tarnish it if I let it. “Wear it now, before your hands get old.”

By the time I hit 45, Mom was 70, and several times I’d caught her muttering at herself in the mirror. “Ugly old woman”—she’d say disgustedly. I’m not making this up. This was in imitation of her own mother she later confessed.

Writing this I still feel the shock of realizing just how much ageism in our culture had warped my mom’s view of herself. In reality, in her late 70’s she was a strong, handsome woman who drew people in with her curiosity and vivaciousness. She had a loving family, many friends, and volunteer work of great responsibility and interest to her.

And the woman who would never set foot in a nursing home out of fear and loathing? She learned late in life, after moving into assisted living, and even in illness, that she not only enjoyed her days, but captured the love of adoring new friends—of all ages.

Where did my mom learn to loathe her own aging body and to fear the future? Was it her mom’s fault? Or could it be the Western culture they both grew up in? Fortunately, somewhere between Mom’s dire warnings and my own aging past mid-life, I learned to see the beauty of older bodies, and also into the steel within.

In addition, I’ve learned that negative stereotypes of age bombard us from our earliest years, setting the stage for how we will feel about ourselves as we age. We take them in from many sources, we apply them to others, and eventually we must apply them to ourselves. Talk about divine retribution!

In an article in the Edmonton Sun, psychologist Sheree Kwong See of the University of Alberta has observed that kids pick up negative age stereotypes in movies, cartoons, their interactions with people, and even their own storybooks. Unfortunately, skewed images of physical and cognitive decline then dominate their views of growing older. “They use their beliefs and stereotypes to try to make sense of the situation…Not only do they report these beliefs about older people on questionnaires, but they use them to guide their behavior.”  And as activist Ashton Applewhite has written—it is ageism that creates the pictures of ugliness and hopelessness around normal aging, and blinds us to what we gain as we grow older. 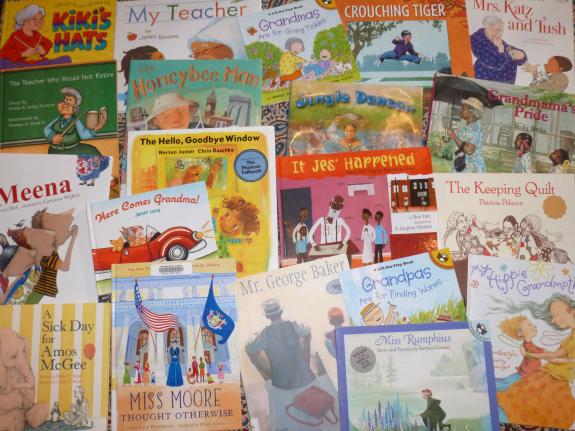 My own anti-ageism efforts promote more diverse and positive images of age in children’s picture books. The forgetful grandpa, the beloved grandma who dies, the grumpy old man in need of childish cheering, the sad and lonely old woman down the block—they tug at our heartstrings. Picture books can lean toward the sentimental, but they do not truly represent the diversity of people over the age of 65.

Researcher Sheree Kwong See observes the seeds of ageism being planted in children as young as toddlers, and recommends that advocacy start early. “Right from the very beginning we need to show realistic images of older people. If we want people to rely less on stereotypes, we need to show them the exceptions;”

I say, let’s nip ageism in the bud. Children need to see the more accurate heterogeneity of older adults. A diversity of culture certainly, but also a diversity of abilities, talents, and interests. Empathy for those less fortunate is a terrific thing to teach, but instilling a happy anticipation of their own future is essential.