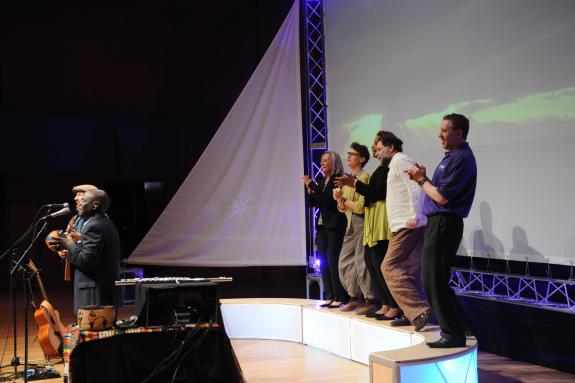 But that’s what happened when Nate Richardson and Samité wrapped up each show of the Second Wind tour — audience members were up on their feet too. This was in Minneapolis last Friday, at the end of the third week of this 25-city tour. On stage with me: Susan Frazier, who spoke about the Eden Alternative’s humane model of long-term care (and who could actually sing), psychiatrist Janet Taylor, who described how the older brain is wired for change, geriatrician and guiding spirit Bill Thomas, and Joel Theisen, CEO of Lifesprk, our regional sponsor.  It was an extraordinary experience, and if it’s true that doing something that scares you builds cognitive reserve, stepping out on a giant stage without notes in five different cities has built me enough to coast for a while.

A number of the regional speakers work in long-term care, among them Helene Wineberg of Forward Chicago. Helene showed a short video in which a lovely, animated woman from a Forward Chicago community described her “funnel theory of life.” As time passes, things slip out the bottom, her example being a childhood friend now lost to profound dementia, “so you have to keep putting stuff in.” The top of the funnel is big enough to hold all kinds of new things, whether people, tastes, ideas, or activities. I like this metaphor, and I’m planning to keep tossing stuff into that funnel.