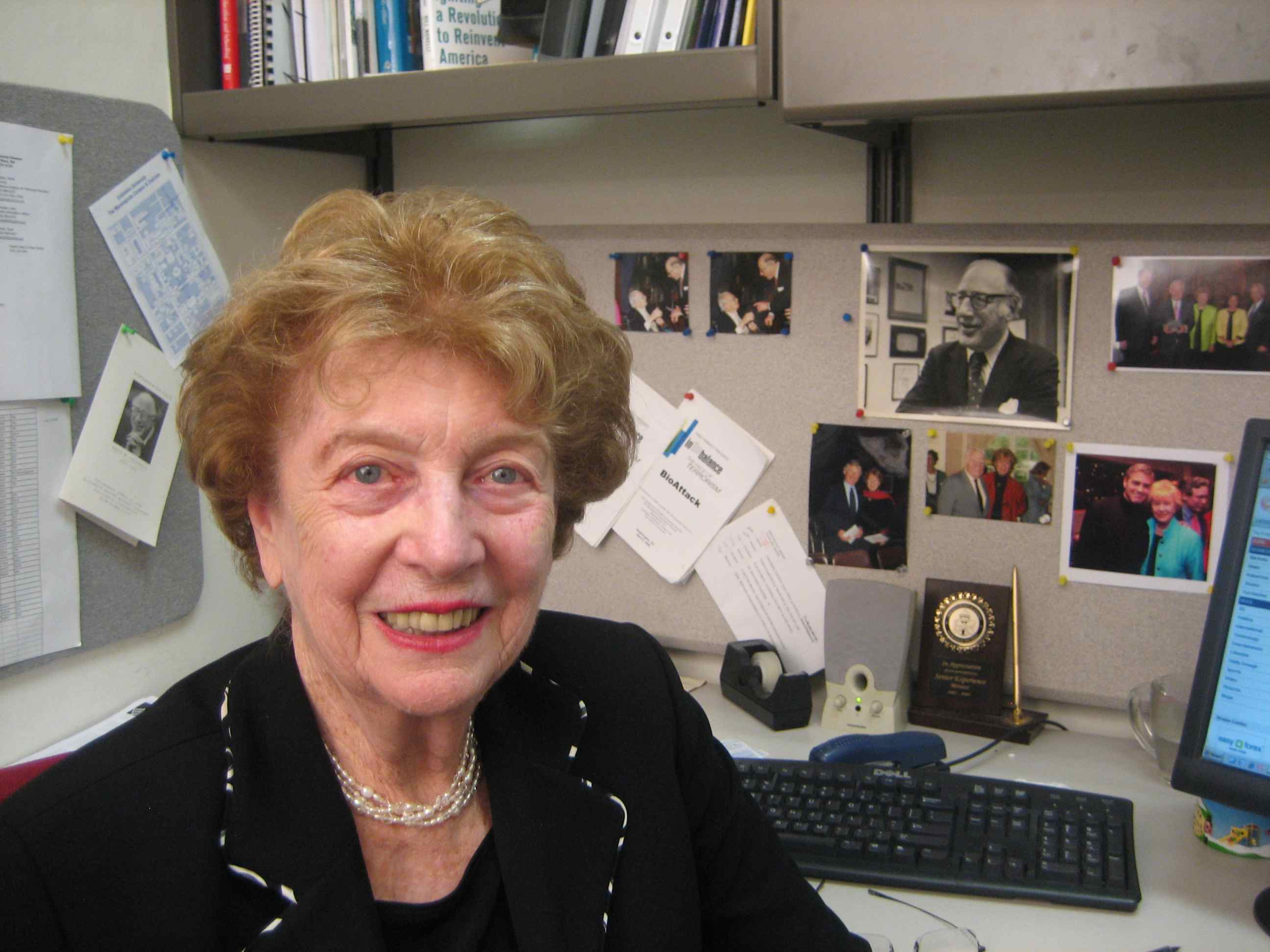 Ruth Friendly is the Vice President and Editorial Director of Fred Friendly Seminars: award-winning television programs that explore ethical, legal and public policy questions. I met her through work, writing educational materials to accompany “Our Genes, Our Choices,” a seminar about the implications of genetic testing. I’m embarrassed to admit that before the first meeting, I assumed that as the founder’s widow, her role would be largely symbolic.

I was set straight in about 10 seconds. Ruth is a key player in a demanding collaboration, firmly insistent on the hard thinking that makes the seminars an exemplar of high-quality broadcast journalism. A generous pragmatist, she kept the interview briskly on track — “or how are we ever going to get to 80?”

There’s no question that Ruth’s career owes a great deal to the legendary one of her late husband, Fred Friendly. In the 2005 feature film “Good Night and Good Luck,” George Clooney played Friendly when he and Edward R. Murrow were producing the “See It Now” documentary series on CBS.  In the 60s, Friendly became head  of CBS News. He resigned in 1966, when the network ran and reran “I Love Lucy” instead of the first Senate hearings about American involvement in Vietnam. Moving on to become Director of the Media and Society Seminars, he created a provocative form of television that uses the Socratic method to  to explore complex issues.  Each program addresses a specific subject by pushing a group of eminent panelists to wrestle with hypothetical scenarios and nuanced choices drawn from real life. Values clash; many outcomes are possible. It’s tough TV: demanding, engaging, and rewarding.

Friendly’s picture is pinned to the bulletin board in Ruth’s office at the Columbia University School of Journalism, where at 85 she continues to produce the television seminars that he made famous. “I fell into this because of Fred,” she said, characteristically straightforward. “Let’s be honest, that’s how I’m still working. We wouldn’t hire anyone close to my age!” Well, yeah — but that’s far from the whole story. Although she’d long been editing Fred’s articles and accompanying him on research trips, deciding to work together was a big decision. It meant retiring from teaching elementary school in Scarsdale, New York, working for no pay, and starting as a gopher. The first big job came with a call from the Annenberg Foundation that turned into a 13-part series, “The Constitution: A Delicate Balance.”

Ruth was soon doing research, then producing. “What I learned from Fred is how to be a journalist, how to know the right questions to ask,” she recalled. In addition to their work at the Media & Society Seminars, the couple, represented by the Leigh Bureau, produced programs all over the country, and split the income 50/50. Fred was the moderator, and Ruth, working with the client, designed the hypothetical scenarios around issues chosen by clients. She remembers pitching the topic of abortion to a nursing school in Tyler, Texas, then acknowledging “’You’re probably in the Bible belt.’ She said, ‘We’re the buckle of the belt. Do it.’” This “learning by doing was very exciting,” and at the time they were doing more seminars than the people back at the office.

Things slowed down after Fred had a slight stroke at 77. After his death in 1998 from complications of a second stroke, Ruth, then 74, went to work for the rechristened Fred Friendly Seminars full-time, this time on the payroll. “It was probably more gratifying when Fred was around, because we had ten-part series; now we’re happy to get a three-part series on air,” she recounted. “We still produce several not-for-television programs a year.” Ruth finds all of it stimulating, but she does miss the support of “a great partner who thought I could do no wrong.” (The first audio clip below describes Fred calling on Ruth for tech support at Windows on the World.) Still, after his death Ruth acknowledged that, “I did come into my own in many ways. I adored Fred, but I didn’t have to defer to anyone, and I made the decisions and I had to live with them. Just like now I live in this big old Riverdale house all by myself and I don’t mind. It’s a new chapter, and a feeling of independence.” Later, she adds, “we didn’t talk about how much this [job] takes out of my day.  My house is a mess!”

Ruth doesn’t run the operation, and around the time she turned 80 she cut back to a 4-day week. But she’s involved in all policy decisions, as well as the website and all the materials that accompany each program. At the moment she’s working on a seminar about coping with severe mental illness, and another with  West Point about dealing with insurgencies. “The Army doesn’t want the sociologist there; nobody else can speak Arabic; who are we going to get for the panel, and so on,” she happily enumerated. “I have plenty of time to think about these things. I’ll come in the morning and say, ‘What about so-and-so?’”

Ruth works because it’s fun and because she loves the mental stimulation. “The smarts, that’s what’s sexy for me. I love chewing on things, grappling with the issues.” When her son Andy, also a television producer, was contemplating retirement, she told him, “At 54 you can’t retire. You need that platform.” Turning to me, she declared, “Work gives you status, it really does, and a platform to speak from. Maybe that’s why I work. Maybe that’s why.”

In fact, Ruth’s penchant for work has snuck up on her repeatedly over the decades, almost as if it had a will of its own. It’s helped her weather terrible blows, and it has yielded to the demands of family on four separate occasions. The first was at 21, when she bailed on a teaching fellowship to keep her fiancé, Sandy Mark, from staying in Australia. They built “a nice suburban house” in Scarsdale, had four children (one of whom died in infancy), and when the youngest was about a year and a half, she applied to Teacher’s College, Columbia. “I had no intention of working,” she explained. “It was going to be a career for my old age. But before you knew it I was applying for jobs.”

At 33, Ruth landed a full-time job teaching fifth grade in Bronxville, “my first real job, for $6000 a year, a lot of money at the time. I was so in love with my work — talk about happiness! I would stay until 4:30 in the afternoon and do the bulletin boards, and I loved my kids.” (The second audio clip below describes what she liked best about the job.) Four or five years into it, “My darling husband and I had a talk, and the feeling was that it was really pulling me out of the house too much. And I stopped. I resigned. It was a hard decision, but I realized that I should pay attention to that feeling.” As the kids grew up, Ruth started subbing in the Scarsdale schools, and by 1962 she was teaching full-time again. “But I had learned that I had to balance these two lives a little better than I had the first time.”

Then, one Saturday in 1967, Sandy was reading aloud to her and died in the middle of a sentence. “It was terrible; we had been married 21 years.” After a month off, Ruth returned to work, “which was the best thing I ever did.”  She also started dating, which was “like being a teenager at 43. It was horrible, and they mostly were horrible guys that I would go out with once,” she recounted with a grimace, adding wryly, “Where are they now?” Then her friend Helen Bernstein, who was married to the head of Random House, invited her to a star-studded dinner party with Kitty Carlisle, Bennett Cerf, Ted Geisel (Dr. Seuss), and Fred Friendly. Friends drove her down, so she had no car. “This was in Claudette Colbert’s apartment, which they sublet, and this was for Fred to meet me, and he knew it. Fred was very chivalrous and felt therefore he should drive me home, which he did.”

That was December; they married the following spring, in 1968. Divorced after a marriage that had run into tough problems, Fred had been raising their three children — so Ruth suddenly found herself with six kids under one roof. “If you ask me what the best thing I did in my life, it was putting together these two families,” she declared, without a shred of ambivalence. Again, she quit teaching, volunteered in city schools and in Fred’s office on occasion, and returned to the classroom only after the nest emptied. The final hiatus came when she nursed Fred at the end of his life.  This time, becoming a widow “took a year instead of a minute.” Which is worse? “They’re both worse. I was married to Fred 30 years. I had a great first marriage and a rollercoaster-fantastic second marriage.”  Is she ready for another? “No, I’m going to go the rest on my own.”

Ruth wondered whether she’d feel as content in her independence if she weren’t so healthy. “Maybe not. I did have sciatica, and this is a three-story house, and for a while I was going one step at a time, I thought, ‘Am I going to have to move? I don’t want to.” She also has some macular degeneration, and “suddenly, I’m walking slower.” Every Sunday she drives into the city for dinner with her son Richard Mark and his family, “and I have to say, ‘Can you slow down?’ as he walks me to my car. That’s not me; I don’t like that.” A basketball player in her college days and a big golfer most of her life, Ruth recently went to a doctor who asked, “’Do you smoke?’ I said no. ‘Do you drink?’ No. ‘Do you exercise?’ No. She said, ‘You’re supposed to say yes!’ I wish I did.”

A good lecturer, Ruth did a fair amount of speaking after “Good Night and Good Luck” came out, and debates “whether I should keep doing this or whether there’s something else in store.”  Acknowledging that it’s different if someone is ill and suffering, she doesn’t like to think about death. “I have one friend who says, ‘I’m ready to go.’  I’m not!  And I resent her saying that.”